Research devoted to room temperature lithium–sulfur (Li/S8) and lithium–oxygen (Li/O2) batteries has significantly increased over the past ten years. The race to develop such cell systems is mainly motivated by the very high theoretical energy density and the abundance of sulfur and oxygen. The cell chemistry, however, is complex, and progress toward practical device development remains hampered by some fundamental key issues, which are currently being tackled by numerous approaches.

Quite surprisingly, not much is known about the analogous sodium-based battery systems, although the already commercialized, high-temperature Na/S8 and Na/NiCl2 batteries suggest that a rechargeable battery based on sodium is feasible on a large scale. Moreover, the natural abundance of sodium is an attractive benefit for the development of batteries based on low cost components.

This review provides a summary of the state-of-the-art knowledge on lithium–sulfur and lithium–oxygen batteries and a direct comparison with the analogous sodium systems. The general properties, major benefits and challenges, recent strategies for performance improvements and general guidelines for further development are summarized and critically discussed. In general, the substitution of lithium for sodium has a strong impact on the overall properties of the cell reaction and differences in ion transport, phase stability, electrode potential, energy density, etc. can be thus expected.

Whether these differences will benefit a more reversible cell chemistry is still an open question, but some of the first reports on room temperature Na/S8 and Na/O2 cells already show some exciting differences as compared to the established Li/S8 and Li/O2 systems.

Rechargeable lithium-ion batteries (LIBs) have rapidly become the most important form of energy storage for all mobile applications since their commercialization in the early 1990s. This is mainly due to their unrivaled energy density that easily surpasses other rechargeable battery systems such as metal–hydride or lead–acid. However, the ongoing need to store electricity even more safely, more compactly and more affordably necessitates continuous research and development.

The need for inexpensive stationary energy storage has become an additional challenge, which also triggers research on alternative batteries. Major efforts are directed towards continuous improvements of the different Li-ion technologies by more efficient packaging, processing, better electrolytes and optimized electrode materials, for example. Although significant progress has been achieved with respect to the power density over the last years, the increase in energy density (volumetrically and gravimetrically) was relatively small. A comparison of different battery technologies with respect to their energy densities is shown in Figure 1. 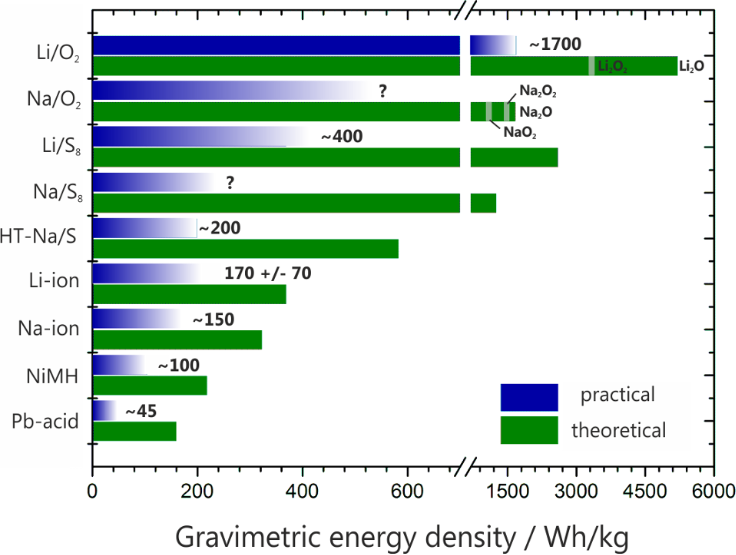 Figure 1: Theoretical and (estimated) practical energy densities of different rechargeable batteries: Pb–acid – lead acid, NiMH – nickel metal hydride, Na-ion – estimate derived from data for Li-ion assuming a slightly lower cell voltage, Li-ion – average over different types, HT-Na/S8 – high temperature sodium–sulfur battery, Li/S8 and Na/S8 – lithium–sulfur and sodium–sulfur battery assuming Li2S and Na2S as discharge products, Li/O2 and Na/O2 – lithium–oxygen battery (theoretical values include the weight of oxygen and depend on the stoichiometry of the assumed discharge product, i.e., oxide, peroxide or superoxide). Note that the values for practical energy densities can largely vary depending on the battery design (size, high power, high energy, single cell or battery) and the state of development. All values for practical energy densities refer to the cell level (except Pb–acid, 12 V). The values for the Li/S8 and Li/O2 batteries were taken from the literature (cited within the main text) and are used to estimate the energy densities for the Na/S8 and Na/O2 cells. Of the above technologies, only the lead acid, NiMH, Li-ion and high temperature Na/S8 technologies have been commercialized to date.